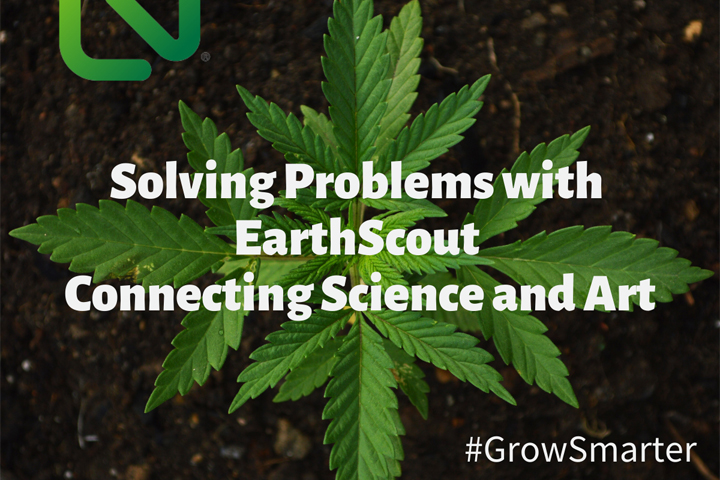 The more I learn about how plants grow, the more I find them fascinating. Even though I have been studying plants for over 20 years, there is always something new to discover. While I continue to work with growers in the cannabis and hemp space, it becomes increasingly evident that standard conventional and organic production assumptions cannot be blanket applied to this pair of crops.

Our growers are learning more about deficit irrigation techniques and we are creating databases for them to track provided or naturally available water with yield production effects. Most of our growers have been actively irrigating their crops and are looking to reduce wasted water (and money) without compromising plant health or yield production.

We have many EarthScouts set up with outdoor growers who are looking to better irrigate their cannabis and hemp crops or who want to gather dry-land data to better match the strain they were growing with actual available water and light conditions.

Hemp and cannabis are organic crops and remain restricted on a federal level, therefore there are almost no commercial pest control products available for use on these specific crops. This, along with the plants’ terpene and cannabinoid production being tied to the stress that it experiences, means walking a very fine line at times when it comes to moisture management.

A licensed cannabis grower in Oregon was seeing some stunting in their early season crop. Growing for recreational cannabinoids, they wanted to ensure that early season growth was maximized (to set up for what I have started to think of as a “lean and mean” pre-flower and flowering growth period). The problem was, one of their fields was not responding the same as the others.

The first week of EarthScout data showed the fields were physically receiving enough water. In fact, all the plants were being slightly over watered. However, the grower reported a vast difference in appearance by one of the strains, so we discussed the visual differences of the plants (through pictures and videos) and other possible stresses affecting the plants. We then decided to cut total irrigation time to all fields and extend the time between watering events. The following week, we would get back together to re-evaluate (or they should contact me immediately if symptoms worsened).

We began to meet on the phone every Wednesday to review their EarthScout data, notes, pictures, videos and the results of changes they decided to make over the past week.

From an agronomic side, I read anything I could find about the symptoms we were seeing in the plants. The unhappy plants kept presenting as over-watered even though we could visibly see on the soil moisture data via the EarthScout app and through manual soil evaluation that they were far from “drowning”. In comparison to the other EarthScout data from the farm (from nearly identical soils) the watering regimen should have been working fabulously – the other strains were thriving! These plants were, on paper, exceptionally well irrigated.

After about 3 weeks, I had spoken with an irrigation specialist, re-examined their soil tests, considered potential nutrient problems, and even dug up and observed some plant roots.

Then I had a “eureka!” moment.

My epiphany came while speaking with a new customer about their soil, growing concerns, and helping them decide how best to deploy their EarthScout units. I realized that “dry enough” by conventional agriculture standards may not have been “dry enough” for cannabis and hemp (or this particular strain). Those of you who grow, know – this plant and some of the strains are particularly quirky.

While I was listening to this new grower explain how they had noticed their soil chemistry seemed to be affecting physical soil conditions, I decided to re-check the oxygen sensor readings for our problem plants. I needed to think about their growing conditions outside of the “norms” that are established for conventional crops.

Now we’re on to something…

The oxygen readings were very enlightening. The unhappy plants were experiencing reduced oxygenation conditions that the happy plants were not, even though they were both being watered similarly and had nearly identical soil tests. The O2% was well within expectations for conventional crops, but it was clearly very different from what the happier strains were experiencing. The diurnal fluctuations were larger (lower O2 readings were off by 3-4%) and the amount of time the unhappy roots were spending in the 20% O2 range was significantly shorter.

As the grower and I discussed this and looked at the data, they decided that it was worth the potential risk of drying these plants down well below what would typically be recommended for most crops. Irrigation would be withheld until the moisture was far below the predicted Plant Wilting Point for at least 3 cycles and the irrigation would not exceed a level that was far below the predicted Field Capacity.

The risk and the reward.

There was reason to believe this would work but felt risky either way. It takes guts for a grower to try something new, but the data gave the grower confidence to move forward with the plan.

It worked! We were right. The plants came back and ended up producing good, quality buds. After that week, the grower increased irrigation amounts (duration) again but because they were watching their root-zone O2 saturation in addition to the moisture levels, they realized that this field needed a longer dry down between irrigation events than others. By the time the crop moved into pre-flower and other agronomic changes were made, the formerly unhappy plants were keeping up much better with their neighbors and they could irrigate each of the fields on the same days.

Lessons learned and a new perspective

The ever important “why” is the difference between the art of growing and the science of growing. With EarthScout we had a road map to follow, and we scientifically learned about what worked and why!

I don’t think science can replace art in agriculture, but I do think it refines the art and allows the grower (the artist) to advance their skills and knowledge base further, faster.

As a result of working with this grower EarthScout has decided to set up weekly or bi-weekly 10-minute meetings with all growers and their Grow Coach. Even if there isn’t a major issue going on in the field, regular interaction will make all the difference for growers as they learn to think about data analysis differently and as their Grow Coach adapts to their needs and preferences.

For further information about how EarthScout can help you learn more about your plants and how to manage your resources more efficiently, visit EarthScout.com, or contact an EarthScout Grow Coach today at 877-443-7632.

Theresa Bayrer (Lead Grow Coach for EarthScout) is a plant physiologist with over 20 years of experience in professional agronomics.